Dancing With the Stars Season 19, Week 5 was not nearly as fun as it should have been, thanks in part to grumpy judges who made us miss “Grumpy” Len Goodman even more than we already did before the night began. The scores were low. The comments were harsh. The energy was a bit down. The dancing was not at its best. We saw the 5 paddle multiple times and the 10 paddle stayed home. There were certainly moments to cheer — well done Sadie, Lea, and Alfonso — but also moments to boo.

There were moments to cringe as well, since the judges — including non-dancer and, apparently, non-DWTS viewer Jessie J — weren’t completely wrong about some of the moves being difficult to watch. (A few of those lifts! Yikes!) They’re right that, in Week 5, the level of dancing should be a bit higher on some counts. It was like Week 1 out there a few too many times. 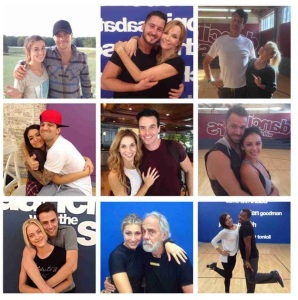 But it’s also Switch Up Week with new partners, and they were given funky new dances that are new to DWTS in general. And not to defend Michael’s dancing, but if you want him to stop being The Funny Guy, don’t give him a dance like Disco. Maybe things would’ve been different with more traditional DWTS dances like Argentine Tango, Cha-Cha, Paso Doble, etc. Or maybe it was just a social experiment that was destined to disappoint. Either way, we’re not looking forward to next season’s Switch Up as much as we were anticipating this one. (There were no Meryl & Val moments this time, that’s for sure.)

No one went home on October 13, but someone is leaving next Monday on Week 6. Who will it be? Jonathan? Michael? Tommy? They seem like the most likely suspects at this point, but they could also get sympathy votes from the public, since they all took a beating from the judges.

Jessie J opens the show with “Bang Bang” and “Burnin’ Up”