Century City, CA – Over 200 of Southern California’s most influential and socially conscious supporters walked the red carpet and attended the organization’s annual fundraising event of the year at the Intercontinental Grand Ballroom, Century City.

The C.A.R.R.Y. organization, was founded by esteemed celebrity dermatologist, Dr. Pearl Grimes, and is dedicated to improving the lives of foster and at-risk youth by providing pro-bono dermatological services and life-changing social skills and scholarship programs.

Dr. Grimes is not only the founder of the organization but is intimately involved with the children. During the event Jenifer Lewis said “Dr. Pearl Grimes is doing so much for these children. I’ve been to the center. Last time I was there we did yoga and poetry. Dr. Pearl Grimes is always there leading and helping them, loving them”.

During the cocktail hour, before the ceremonies began, guests were treated to wonderful tapas and delightful drinks . Afterwards, during the event, Jenifer Lewis entertained the attendees with song and comedic fun while discussing the importance of C.A.R.R.Y.’s work. Lest the night be over, there was dancing and a delicious vegetarian buffet and, of course, THE CHARITY RAFFLE.

All in all, a night to remember not only for the fun and gaiety but for the seriousness and purpose of the event. Thousands of children are in need of help in cities around our nation and C.A.R.R.Y. is indeed doing its part to provide services that will save and build lives of youth in need. Thanks to all the people at C.A.R.R.Y., the Celebrities, Guests and Press that made this event so successful.

The Coalition for At-Risk Youth is an all-volunteer effort led by Dr. Pearl E. Grimes. In less than ten years, they have raised over $1 million, helped thousands of foster kids and sponsored hundreds with their unique programs manned by volunteers who are devoted to build character and self-esteem of children who often never had any via arts & crafts, entertainment, dance and horseback riding. They are completely dependent upon fundraising activities and private donations. They receive no state, federal or local funding. For more information 323-302-0412. For additional information, please visit: http://www.foratriskyouth.org

A family man struggles to gain a sense of cultural identity while raising his kids in a predominantly white, upper-middle-class neighborhood. 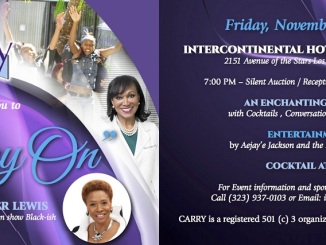