The award-winning documentary feature film A Billion Lives that has ignited a worldwide movement is launching its theatrical release with the Red Carpet Premiere on Wednesday, October 26, at the Arclight Cinerama Dome in Hollywood (see invitation below for details).

Rarely does a film come along that ignites a worldwide movement to help save a billion lives.

This award-winning documentary examines the alarming projection by the World Health Organization that a billion people are going to die this century due to smoking related illnesses.  It also poses the very serious question: “Are a billion lives being sacrificed for billions of dollars?”

To search for the truth, award-winning filmmaker Aaron Biebert traveled across four continents, interviewing leading doctors, noted scientists and prominent health policy makers. Throughout this journey, he discovers the hidden facts behind the e-cigarette and vapor technology industry, and exposes the corporate and governmental forces intent on destroying it.

For those who smoke cigarettes or love somebody who does, this is a must-see film that shows how corrupt corporations and their global government cronies allow people to die for the sake of profit.

A BILLION LIVES is playing at Laemmle’s Music Hall in Beverly Hills for a limited engagement beginning October 28th through November 4th. 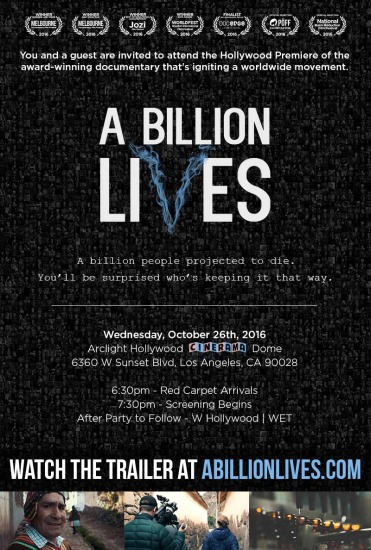