Co-Written and Produced by Oscar nominated Joe Bologna, and the Laniado Brothers Who Also Co-Star

Karina Smirnoff, 20 Season Champion of “Dancing With the Stars” Shows Off Her Acting Skills as Tango Shalom Female Lead

After the bleakest year in the 21st Century, ecumenical reps of major worldwide religious beliefs come together over this groundbreaking film to promote the one doctrine they all share in common: laughter. How fitting, the first film in history that the Vatican, a Hasidic Synagogue, a Mosque, and a Sikh Temple would collaborate on, is a comedy.

“TANGO SHALOM” rolls out in over nine seasoned Film Festivals in the US and one in India, the film production capital of the world, where it just won The Jaipur Critics Award as per The Times of India and Best Comedy and Best Actor (Jos Laniado) at the Montreal Independent Film Festival. This American dance comedy with a star-studded soundtrack and fun Bollywood-like dance sequences will steal your heart away step by step!

“TANGO SHALOM” storyline: Moshe Yehuda, a Hasidic Rabbi and amateur Hora dancer, played by Jos Laniado, enters a big televised Tango competition to save his Hebrew school from bankruptcy. There is only one problem: due to his orthodox religious beliefs, he is not allowed to touch a woman! At odds with his wife and five kids, the Grand Rabbi of his orthodox sect, and Moshe’s entire Hasidic community in Crown Heights, Brooklyn, Moshe is forced to ask a Catholic priest, a Muslim imam, and a Sikh holy man for advice. Together, they hash out a plan to help Moshe dance in the Tango contest “without sacrificing his sacred beliefs”… setting in motion a fun, passionate dance movie. Heart-pumping and heartwarming, “TANGO SHALOM” tests the bonds of family and community, and the bounds of tolerance and faith. 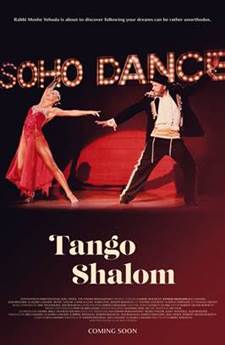 An eclectic and modern soundtrack provided by Universal Music includes multiple Grammy Award-winning Gordon Goodwin, Latin Grammy-nominated Tango sensation Daniel Binelli, The actual Vatican Choir, the top-charts British act Touch and Go, as well as modern Klezmer bands Golem, The Burning Bush, and Barcelona Gypsy Klezmer Band. All the dance sequences were choreographed by Jordi Caballero, who worked with Madonna, and The Spice Girls, and was Supervising Choreographer for “Dancing With The Stars”.

One dazzling dance step at a time… “TANGO SHALOM” is an inspiring and joyous celebration of Hasidic Jewish life. An interfaith milestone, this is the first film in history that was a joint collaboration with The Vatican, a Hasidic Synagogue, a Sikh Temple, and a Mosque, which promotes a timeless message of peace, tolerance, and love.

IMPORTANT LINKS– with more Hi Res and low res photos which are also attached above: