Van Nuys, California – The George and Brett Barris Red Carpet Book Launching and Signing Gala was held on Saturday, August 28, 2015 and co sponsored by and at Galpin Aston Martin of Van Nuys, California. The Gala event served as an honor and tribute to George Barris by his son, Brett, who put together the creative life’s work of his father, over 500 pages and five years in the making. Many of Hollywood’s most famous auto designers, kustomizers, collectors, drivers, movie, TV and media stars made an appearance at the event along with folks from the Petersen Museum and Southern California’s “Kustom Car Culture”.

From humble beginnings in Chicago in the 1920’s, George’s love of cars began early. At the age of eighteen, he set out for Los Angeles to fabricate cars for the movie industry. He created some of the best known and iconic cars of the 20th century, some of which include the original TV Batmobile, the Munsters Koach, the Hirohata Merc,the Golden Sahara, along with a nearly innumerable number of movie and specialty cars.

At the age of 90, George and Barris Kustom Industries continue with the help of son, Brett, who perseveres in preserving the Barris legacy.

Thanks to Edward Lozzi & Associates Public Relations for organizing the epic event. 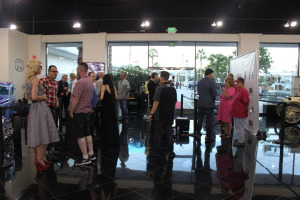 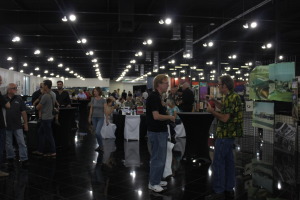 The George and Brett Barris

‘KING OF THE KUSTOMIZERS: The Art of George Barris’,

Media Invite to join America’s Most famous auto designers, kustomizers, collectors, drivers, movie, TV and media stars  all be in attendance to celebrate another Barris triumph, the publication of the ultimate Barris collectible ART Book, KING OF THE KUSTOMIZERS: The Art of George Barris. Many of these VIPs are included within the book, which was five years in the making. Petersen Museum folks and Southern California’s “kustom car culture” will be attending in force. There will be many cool TV-Film and famous Hot Rods inside the party.

George Barris is indisputably the “King of the Kustomizers,” the most phenomenal kustom car builder ever. Barris created some of the best known and iconic cars of the 20th century, including the original TV Batmobile, the Munsters Koach, Hirohata Merc, Ala Kart and countless other made-to-order vehicles for movies, TV, and for the private use of his celebrity clients. “King of the Kustomizers: The Art of George Barris” is the definitive work on a legend, over five years in the making. This is a massive volume containing nearly 500 pages jam-packed with never-before-seen photos and design illustrations, illuminating how Barris’ creations helped redefine the automobile’s place in American culture. Written by an all-star line-up of contributors, the book covers the full spectrum of George Barris’ design genius. King of the Kustomizers is filled with untold stories and rare images from both Barris’ famous and not-so-famous works. A generous selection of Barris tribute art―some created especially for this volume―is also included to showcase the enduring influence and legacy of the Barris Kustoms brand. This is one ride you don’t want to miss!

Brett Barris is the son of George Barris. He has worked in the entertainment industry for over fifteen years, and as an art photographer for over twenty. Being the son of George Barris, he knows George’s career better than most. He currently works with his father as a marketing director of Barris Kustom Industries, preserving and extending the Barris legacy. This book fulfills a longtime dream: to share his father’s work as an innovator and multi-talented artist with a wide audience.

Douglas Nason is an anthropologist who has used both writing and photography to explore a deep interest in art and culture. Nason is the author of numerous art books on topics ranging from Tiki to Kustom Kulture, as well as being an award-winning photographer. His work has appeared in publications such as Islands, Juxtapoz, Barracuda, Los Angeles, LA Weekly, World Explorer, International Tattoo Art and H20. Nason has co-curated close to 100 groundbreaking art exhibitions as former co-owner of Copro/Nason Gallery in Santa Monica. 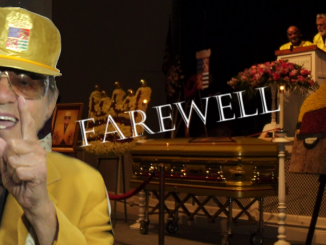