Lawyers for Jean Kasem, wife of 34 years, and Daughter Liberty Kasem, Have Fought Back Today in a Scathing APPEAL of Evidence and Accusations that an attorney named Samuel D. Ingham III Who Also Represents a Reluctant Britney Spears Did Conspire to Isolate and Kill Casey Kasem for Financial Gain

CASE No. B296052, California Court of Appeal, Division Five, the filing asserts, “Ingham was in fact an active participant in this horrifying plot to end Casey’s life for financial gain.”

———-
Los Angeles- (7/19/19) – ‘On June 15, 2014, Appellant Jean Kasem was forever ripped from her beloved husband, companion, and best friend of 35 years, legendary former radio and television personality Casey Kasem at the hands of a cabal led by Casey’s adult children from a previous relationship that ended over 40 years ago, Kerri, Julie, and Michael Kasem (“Kerri,” “Julie,” and “Mike”). Respondent Samuel Ingham III (“Ingham”), though nominally a probate attorney appointed off-and-on to advocate for Casey’s interest, was in fact an active participant in this horrifying plot to end Casey’s life for financial gain. To that end, he performed actions that were far outside the bounds of any conceivable “representation” of Casey and had nothing to do with the rights to free speech or petition.

Working in concert with carefully chosen retained attorneys and doctors, Ingham and Casey’s older adult children ensured that Casey starved to death in a strange hospital far from home without his wife of more than three decades and youngest daughter, Appellant Liberty Kasem, by his side. Among other conduct, Ingham conspired with Kerri’s attorneys before he had been reappointed as “Casey’s” lawyer, ignored or defied court requests that he visit his “client” in Washington to assess his needs, and responded to news that his “client” was having trouble breathing because his lungs were filling up with liquid and he would likely pass away soon, with the bone-chilling comment, “this is great.” Ingham profited personally from this endeavor, billing hundreds of thousands of dollars in fees to Casey’s estate, while Jean and Liberty remained largely in the dark as to the true nature and scope of his involvement in Casey’s death.

When Jean and Liberty finally learned through discovery the full extent of Ingham’s wrongdoing, they promptly identified him as a Doe defendant in their cross-complaint for wrongful death, elder abuse, conversion, extortion, and other causes of action. Ingham responded with a special motion to strike under Cal. Code Civ. Proc. § 425.16 (the “anti-SLAPP2” statute), waving his bar card as though it were a shield against liability for his contribution to the premature death of a beloved husband and father.

A law license is not a license to kill. Ingham’s conduct has nothing to do with freedom of speech and the right of petition, the dual aims protected by the anti-SLAPP statute. Moreover, Jean and Liberty have shown a likelihood of prevailing on the merits.

WHO IS Samuel D. Ingham III? By Jean Kasem 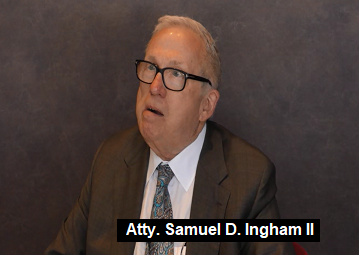 “Samuel D. Ingham III, is a low profile Los Angeles attorney who is often court appointed to represent high profile celebrities like Britney Spears, Casey Kasem and Sumner Redstone, to name a few, and rakes in a lot of cash in the process.

Ingham, a UCLA SOL graduate, was admitted to the State Bar of California on December 18, 1975 and has been on the Los Angeles Superior Court’s “Appointed Counsel Panel” since 1985.

So who is he? Here’s what we know.

Ingham is still Britney Spears’ court appointed attorney since the world famous singer was placed in a forced conservatorship in 2008, 11 years ago. So, why is Britney still shackled in a conservatorship? Because Ingham, who collects over $100,000 a month in fees to ostensibly “represent” her, says, without any valid explanation, that she still needs to be. How convenient.

Ingham, who drives a Range Rover by day and a Porsche that he sneaks out of his backyard garage in the evening, is often seen leaving his Los Angeles home on Veterans Avenue, heading to symposiums to mingle with LASC’s most powerful judges. Hmmm, perhaps to get the next lucrative court appointment of a celebrity??

During the weekdays, Ingham can be seen trolling the halls of the Los Angeles Superior, downtown courthouse, comfortably walking into clerk’s offices and judges’ chambers, as if he were right at home.

On the weekend, Ingham heads out to his sprawling hideaway in Ojai, where he indulges in the souvenirs he has collected from his probate victims. He likes to refer to himself as “Ojai Sam.”

Oh yes, Ingham loves celebrity memorabilia and has amassed quite a collection over the years.

Ingham’s fortunes, however, began to change when on October 8, 2013, he was appointed to represent Casey Kasem – supposedly. He didn’t count on Casey’s wife Jean, bringing to light his dirtiest secrets of how he really makes his cash.

Case No. B296052, California Court of Appeal, Division Five, the filing asserts, “Ingham was in fact an active participant in this horrifying plot to end Casey’s life for financial gain.

Stay tuned gang, don’t touch that dial, this Scooby Doo Mystery is about to unfold … except this time, Shaggy is the victim.” Jean Kasem

CASE NO. B296052
IN THE COURT OF APPEAL
OF THE STATE OF CALIFORNIA
SECOND APPELLATE DISTRICT
DIVISION FIVE

APPELLANTS’ OPENING BRIEF
On Appeal from the Superior Court for the State of California,
County of Los Angeles, Case No. BC602512