2019 marked Concern’s 45th Annual Block Party and since its inception, Concern has raised over $68 Million Dollars in salary support to 800 gifted cancer scientists studying cancer. This year, in honor of their lifetime of contribution and efforts in support of the Concern Foundation, Judy Carroll, Lexy & John Carroll & the Carroll Family were awarded with the Lifetime of Giving Award. The successful event was led by the Concern office staff, a team of volunteers and designed once again by John Ferdenzi of Town and Country Event Rentals.

For the 15th year in a row, Los Angeles Magazine has been Concern Foundation’s media partner and in their long-lasting relationship, has donated nearly $375,000 to concern foundation to help conquer cancer. This year their “The Best of LA 2019®” on Los Angeles Magazine’s street featured relaxing lounge furnished by Mitchell Gold + Bob Williams, photo booths by INFINITI, treats and beverages from ArcLight Cinemas, Seedlip, and Don Francisco’s Coffee, DJ dancing and much more.

CONCERN is an appropriate acronym (CONquer canCER Now) for one of Los Angeles’s best-known and most beloved charities. Since its inception in 1968, CONCERN Foundation, which is dedicated to raising and granting funds to support cancer research worldwide, has broken local ground in many ways: pioneering support of cancer research (specifically in funding young scientists); using the force of celebrity to raise funds; encouraging restaurants and then caterers to share center stage with celebrities to raise money; and pioneering the “block party” fundraiser concept. This non-profit organization’s fundraising milestones also chronicle a rich era in the entertainment-oriented social history of Los Angeles.

Concern Foundation’s mission is to conquer cancer by providing essential funds to support the early yet critical stages of discovery. To date, Concern has raised and awarded over $68 million to 800 gifted cancer scientists around the world.

For 51 years, Concern has pioneered the advancement of cancer immunology—the study of the relationship between the immune system and cancer—a field that is now widely acknowledged to hold the most potential for discovering treatments and preventions for cancer.

With 90-95% of net proceeds going directly to research, Concern Foundation has made significant strides toward bridging a major gap in research funding by focusing its grants on young, innovative researchers with breakthrough ideas. 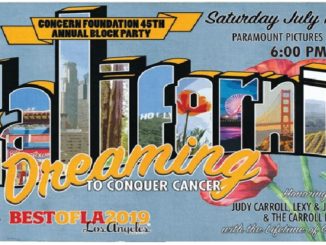